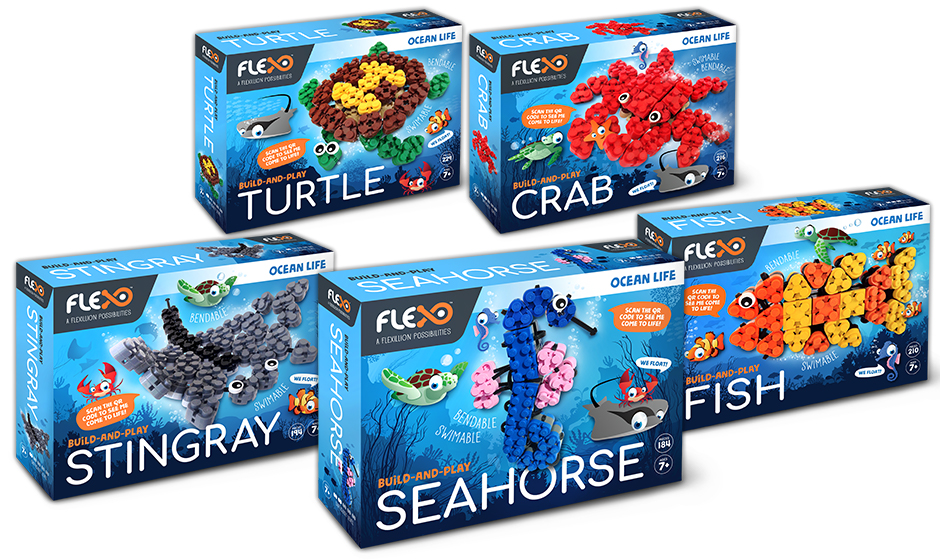 The basic concept of Flexo was widely accepted, and many brick builders found it an elegant solution to a problem they had long wanted to solve. Two successful Kickstarter campaigns showed us that much at least. But when it came time to move things to the next level, there was a lot to consider.

“We knew we wanted to increase playability for kids, while making building with Flexo a fun experience for parents too,” Mark Stolten, inventor of the Flexo system, says, adding “And when we started experimenting with early designs for a range of models, it was the Turtle that sparked the initial idea for Ocean Life.”

And that’s where Mark’s son James steps in. James is the resident designer here at Flexo HQ (a title he humbly resists), and it wasn’t long before he had added to the Turtle, with a Seahorse, Stingray, and Crab evolving into four of the five creatures. The Fish came later, the brain-child of another family member, and the Ocean Friends we now know as the Ocean Life Series – Flexo’s first foray into the world of pre-designed model builds – was born.

Getting these boxed up and ready-to-sell was a conundrum in itself, but it was how best to present the instructions to customers and in what format that led to a brave step by the team: leaving traditional instructions out of the box. “If we were going to present a 2D paper version of how to do the 180-degree bend technique on the Fish head, for example,” Mark explains, “then the instructions would’ve been 50 pages long.” Instead we decided that the only way to truly show the techniques was via video, and YouTube became the focus of how to deliver them.

A thriving channel on the popular streaming and uploading service has long been a dream for us, and we have some grand ambitions about what we’d like to do with the channel in the future. But for now, it is home to a collection of videos, including the five brand new stop-motion animation videos for the Ocean Life Series. With over 1,000 man hours invested in the project, this was no mean feat, and the team are pretty proud of their work. “It’s not Wallace and Gromit, but pretty damn close!” exclaims James, the director behind the videos. “We got an incredibly talented team, and kept the project in-house, which has given us massive control over our own creative destinies as we worked out how on earth to present this stuff. Nobody has done this before!”

The proof is in the watching! Head on over to YouTube, subscribe, and see for yourself! And don’t forget to comment – we just love hearing from you all. Which Ocean Friend is your favourite?

This site uses Akismet to reduce spam. Learn how your comment data is processed.

As of 1st July 2021, Flexo is no longer able to ship to USA, Europe & the United Kingdom. Dismiss